As well as the extension of the title partnership, a new venue was also announced for the third edition of the tournament: the 2017 Porsche European Open will take place on the challenging Nord Course at Green Eagle Golf Courses from 26th to 30th July – the week after the Open Championship.

“The outstanding way in which the Porsche European Open has developed in its first two years has exceeded our expectations. The tournament is synonymous with fantastic sport and also offers visitors an extremely emotional brand experience. As such, we are delighted to be able to continue to offer golf fans world-class golf over the coming years,” said Detlev von Platen, Member of the Executive Board of
Management – Sales and Marketing. “The new venue in Hamburg is of particular importance to Porsche: not only does this beautiful city boast a long golfing tradition, but many of our customers also live in the area."

Porsche in golf
As well as the Porsche European Open, which was staged for the first time in 2015, Porsche AG has also been successfully involved in amateur golf since 1988 with the global Porsche Golf Cup. Porsche has extended its commitment to golf this year with the Porsche Generations Open, an innovative nine-hole format for amateurs from two generations, which is initially only taking place in Germany

Porsche sports sponsorship
Alongside tennis and youth sports projects, the commitment in professional golf forms the third pillar in Porsche’s sports sponsorship strategy. Porsche is actively involved in tennis as the organiser and title sponsor of the Porsche Tennis Grand Prix. The sports car manufacturer is also a partner of the German Tennis Federation (Deutscher Tennis Bund) and supports the Porsche Team Germany as well as the German tennis juniors through the Porsche Talent Team Germany. Furthermore, the current world number one, Angelique Kerber, is a Porsche Brand Ambassador. Porsche additionally promotes young players in football, basketball and ice hockey through its “Turbo for Talents” programme in Stuttgart and Leipzig. 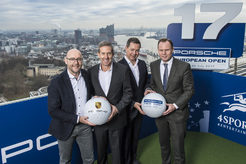