Stuttgart. Angelique Kerber is still on track in Wimbledon after another impressive performance on Tuesday when beating Karolina Muchova has put the Porsche Brand Ambassador into the semi-finals of the world’s most important tournament for a fourth time. In the quarterfinals, she comfortably overcame the Czech 6-2, 6-3 and will now play an Australian on Thursday for a place in the final – either Ashleigh Barty, the current world No. 1 and winner of the 2021 Porsche Tennis Grand Prix, or Ajla Tomljanovic.

“Reaching the Wimbledon semi-finals means a lot to me. It’s simply a magical place,” said Angelique Kerber after her victory. The current world No. 28 won Wimbledon in 2018 and is the only former champion still left in the competition. It is her first appearance in the last four of a grand slam since winning the title. “I knew I’d have to give my all to get so far,” she added, “But I’ve practiced very hard in the past months and prepared intensively for the grass court season and its highlight in Wimbledon.”

In the match against Karolina Muchova, who is world ranked No. 22, she started by going 3-0 up and then wrapped up the first set with a second break. She only found herself behind at the start of the second when fending off three break points in her first service game and then losing her second delivery to trail 2-1, for the first and only time. Angelique Kerber however always had the right answer in the few critical situations she found herself – a rebreak brought her level and she then clinched victory with her second match point after 76 minutes.

It was the tenth win in a row on grass for the 33-year old German. Five came at June’s Bad Homburg Open – the new WTA tournament in Germany supported by Porsche – where she celebrated her first title since Wimbledon in 2018. “I simply love playing on grass,” she said. “First the win in Bad Homburg and now Wimbledon in front of so many fans – it gives me the energy to play my best tennis.


Porsche in tennis
Porsche has been sponsoring the Porsche Tennis Grand Prix ever since 1978 and has also been the organiser since 2002. The tournament in Stuttgart’s Porsche Arena was voted by the players as their favourite event in its category once again in 2019. Within the scope of its global partnership with the Women’s Tennis Association (WTA), Porsche is also the title partner of the “Porsche Race to Shenzhen”, the official qualifying ranking for the Shiseido WTA Finals. The Stuttgart-based sports car manufacturer is also the exclusive automotive partner of the WTA, the eason-ending WTA Finals, and this year of the WTA tournaments in Lyon, St. Petersburg, Berlin and Bad Homburg. As a premium partner of the “Deutsche Tennis Bund” (DTB – German Tennis Association), the company supports Porsche Team Germany in the Billie Jean King Cup (formerly the Fed Cup) and fosters up-and-coming players in the Porsche Talent Team and the Porsche Junior Team. Angelique Kerber, Julia Görges and Maria Sharapova give Porsche a face in tennis as Brand Ambassadors. 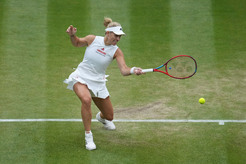