“I want to savour every second in Wimbledon”

Stuttgart. Angelique Kerber fulfilled her lifelong tennis dream when winning Wimbledon in 2018. Ahead of the start of the world’s most famous tournament on 28 June, the Porsche Brand Ambassador takes a look back at her biggest career win – and talks about the special love she has for the time-honoured event in the south-west London suburb.

Thirteen should now become Angelique Kerber’s lucky number. This year will mark her 13th appearance in Wimbledon. Ever since discovering her love for the Grand Slam tournament played at the All England Lawn Tennis and Croquet Club when contesting it for the first time in 2007, many things have changed in the time-honoured grounds. It is more modern and functional, but the old charm and the traditional values have not been lost. The Porsche Brand Ambassador is more than happy with the way things are. When talking to the Porsche Newsroom, she rhapsodises about the ambience and the unique atmosphere. As she is not one of this year’s top favourites, she does not feel any great pressure. She says she wants to savour everything: “I’ll look back at the many wonderful moments from 2018 and simply try to play my best tennis.”

Germany’s top tennis player is currently often asked what she still above all remembers about 14 July 2018 when she fulfilled her lifelong tennis dream of her life after beating Serena Williams. “The victory ceremony,” she says, “I just felt so incredibly happy holding the dish aloft,” She wanted to win Wimbledon right away as a child she recounts. When after two very intensive weeks, she finally achieved the feat three years ago, it was “an unforgettable moment full of joy and pride”.

“Every player wants to win Wimbledon”
Wimbledon has always been Angelique Kerber’s season highlight ever since she started touring professionally. “It’s a tournament every player wants to win,” says the three-time Grand Slam champion. What makes Wimbledon so special?” The tournament is known all over the world. No matter whether people are interested in tennis or not – they’ve heard about Wimbledon,” she says. “The tournament’s great tradition can be felt all around the grounds and I think it’s nice that the tradition is cultivated.” In contrast to many of her fellow players, she has no problem that one still has to play in white at Wimbledon. Quite the opposite: “It doesn’t bother me at all,” she says, “It’s just a part of everything.”

As a player that has already won the year’s most important tournament, she is fairly composed going into her first match on one of the 19 grass courts. “You really are far more relaxed,” she says. “You’ve already held the dish in your hands and know that nobody can take it away from you.” There are however at one and the same time no bonuses for former champions. The past doesn’t count. “Everything starts anew at each tournament, with new players and a new draw,” she says. “And you have to win the first round to be able to play the second, just like at every other event.”

“My name stands for eternity on the dish”
However, the motivation to play well and stay in the tournament for as long as possible is always within the 33-year old German. What are her expectations ahead of travelling to Wimbledon? “Playing in front of spectators at this fantastic tournament is what motivates me most of all. I want to savour every second,” she says and stresses just how much she is looking forward to the tournament: “I’ve played well there a lot of times and not only when I won. I was a semi-finalist back in 2012, something many people have forgotten, and stood in the final for the first time in 2016. “Grass is my favourite surface. I’m also injury free and have practiced well. It bodes well for the tournament.”

No matter what she does in Wimbledon in the rest of her career – she will always be a part of the tournament’s history. It means a lot to her: “It’s something very special,” she says. “My name stands for eternity on the dish. For the rest of my life, I, as a former champion, will always be given a warm welcome in Wimbledon whenever I go back.” They are things that fill me with lots of joy and pride.”

Porsche in tennis
Porsche has been sponsoring the Porsche Tennis Grand Prix ever since 1978 and has also been the organiser since 2002. The tournament in Stuttgart’s Porsche Arena was voted by the players as their favourite event in its category once again in 2019. Within the scope of its global partnership with the Women’s Tennis Association (WTA), Porsche is also the title partner of the “Porsche Race to Shenzhen”, the official qualifying ranking for the Shiseido WTA Finals. The Stuttgart-based sports car manufacturer is also the exclusive automotive partner of the WTA, the season-ending WTA Finals, and this year of the WTA tournaments in Lyon, St. Petersburg as well as in Berlin and Bad Homburg, both new grass court tournaments in Germany. As a premium partner of the “Deutsche Tennis Bund” (DTB – German Tennis Association), the company supports Porsche Team Germany in the Billie Jean King Cup (formerly the Fed Cup) and fosters up-and-coming players in the Porsche Talent Team and the Porsche Junior Team. Angelique Kerber, Julia Görges and Maria Sharapova give Porsche a face in tennis as Brand Ambassadors.

Porsche Brand Ambassador Angelique Kerber ahead of the world’s most famous tournament: "I want to savour every second in Wimbledon" 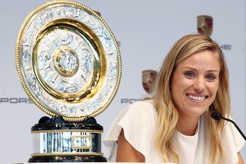 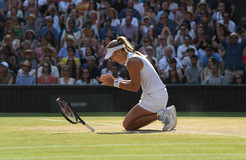 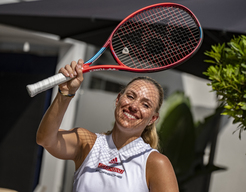 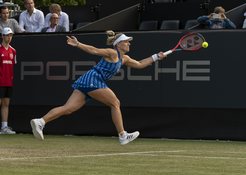