Henrik Stenson and the power that stays the whole time

Stuttgart/Hamburg. “The Iceman” is thawing: the Swedish golf pro Henrik Stenson is renowned within the world elite for his coolness and dry humour which gave the major winner from Göteborg his famous nickname. But Stenson lost his reserve for a moment or two during the Porsche European Open tournament week in Hamburg. On a short spin on the roads between Green Eagle Golf Courses and the Hamburg city centre with his long-time friend and caddy for the week, Marcus Larsson, the two discussed the way the roles were split up within their team, Stenson’s passions – and in doing so felt the enormous acceleration of the Porsche Taycan Turbo S for the first time: “It’s really special,” enthused the multiple Ryder Cup winner afterwards.

Unusually for Stenson, who himself is known as being a highly dynamic golfer, he was visibly euphoric – and it was all down to the inherent power of the electric sports car. “The power is there right away and stays the whole time – the car just never stops accelerating. I only know the incredible feeling from a rollercoaster. It really is a rocket,” said Stenson who won the 2016 Open Championship, the world’s oldest golf tournament.

There was now no stopping Stenson, who raved about the “fantastic handling. I myself like to drive fast. It’s something this car can do extremely well.” The Stenson/Larsson combo is also brilliant – both like fast cars, have the same taste in music and enjoyed a camper van trip together. Such an accelerating experience like the one in the Taycan Turbo S was however a first for both of them.

Despite all the common interests, there are however differences – whilst the one stays in shape better, the other is the better entertainer …

Henrik Stenson and the power that stays the whole time 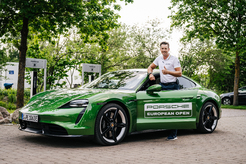 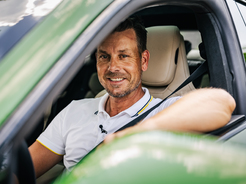 Henrik Stenson in front of the Hole-in-One-Car 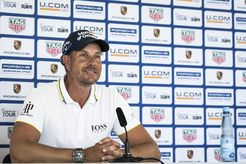