Six Top 10 players and two Stuttgart winners in the quarterfinals

Stuttgart. It could hardly get any classier: six Top 10 players will be contesting the quarterfinals of the 44th Porsche Tennis Grand Prix in the Porsche Arena on Friday. Two Stuttgart winners are still in the race for the Porsche Taycan Turbo S Cross Turismo as the main prize for the winner – Petra Kvitova (2019) and Karolina Pliskova (2018). Tough matches however await them both. Pliskova will meet the world No. 1 and top favourite Ashleigh Barty from Australia at 2.00 pm (all times are CET) whilst Kvitova will take on the Ukrainian Elina Svitolina who knocked Angelique Kerber out of the tournament (not before 5.00 pm). Simona Halep, who is competing at the long-standing Stuttgart tournament for the sixth time and who finally wants to win it, will play the Russian Ekaterina Alexandrova (not before 6.30 pm), who has surprisingly reached the last eight. The last quarterfinal match immediately afterwards will be between Aryna Sabalenka from Belarus and Estonian Anett Kontaveit, the 2019 runner-up.

After the No. 2 seed had a first round bye, Simona Halep entered the tournament fray on Thursday – and sent the Czech Marketa Vondrousova packing when winning 6-1, 6-3 in only 56 minutes. “I’ve been looking forward to the match for the past couple of days and really wanted to get out there and play,” said a highly satisfied looking two-time grand slam champion. “It was a good game from me and it’s so nice to be back in Stuttgart. It’s such a fantastic tournament, also in these difficult times. I just love coming back here.”

Elina Svitolina also stood on Centre Court in the Porsche Arena for the first time and promptly ended Angelique Kerber’s quarterfinal dreams. In the first set, the Porsche Brand Ambassador was equal to everything her opponent threw at her and only succumbed in the tie-break. But then everything went quickly. The No. 4 seeded Ukrainian eventually wrapped up the match 7-6 (4), 6-3 – it was her seventh win in succession against the Porsche Team Germany player. “It wasn’t exactly an easy start to the tournament,” said Elina Svitolina and was full of respect for her opponent: “Angie always extracts the best in me.” Despite the defeat, Angelique Kerber was not unhappy: “It was perhaps my best match this year,” she said confidently when looking forward to the clay court season.

In the first match of the day, Karolina Pliskova had to pull out all the stops to reach the quarterfinals. The Latvian Jelena Ostapenko, the 2017 French Open winner, was a strong adversary and initially improved as the match progressed to take the first set in the tie-break 7-6 (7). However, the 2018 Stuttgart winner fought back to win the next two sets 6-4 and 6-3. “I did many things better than in my first match,” said the Czech. “It’s why I’m proud of myself. I played really good tennis today.” Looking at the quarterfinal against Ashleigh Barty, she said, “To have a chance against her, I will have to be at the top of my game.”

For Aryna Sabalenka on the other hand, everything went pretty quickly en route to the quarterfinals. The world No. 7 only needed one hour and 19 minutes for her 6-4, 6-2 victory against Anna-Lena Friedsam from Porsche Team Germany. “Anna-Lena took her opportunities at the start but then in the second set I got more and more into the match,” said the Belarusian who is making her debut at the Porsche Tennis Grand Prix. I’m very happy to be here. It’s a fantastic tournament.”

There was a big upset in the final match of the day: the Russian Ekaterina Alexandrova, the world No. 34, ousted the seeded Swiss Belinda Bencic 6-1, 7-5.

Four Porsche Team Germany players will be on court in the doubles on Friday. The title holders Mona Barthel and Anna-Lena Friedsam booked a quarterfinal place with a 7-5, 6-0 win against Oksana Kalashnikova/Alla Kudryavtseva. They will now face Nadiia Kichenok and Raluca Olaru at 2.00 pm. Angelique Kerber and Andrea Petkovic will then take on Vivian Heisen/Yafan Wang. 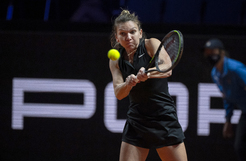 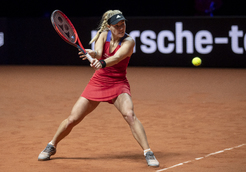 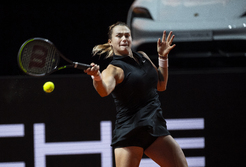 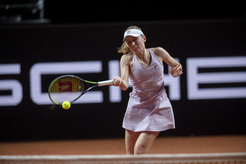 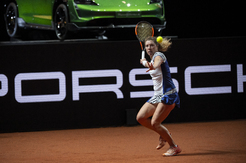