Stuttgart. Ashleigh Barty has started her Porsche Tennis Grand Prix campaign with a comfortable win, something that can be expected of a world No. 1. In her first singles on Centre Court in the Porsche Arena, the Australian overcame the local hero Laura Siegemund in straight sets 6-0, 7-5. The win on Wednesday has put the top favourite, who is making her debut in Stuttgart, in the quarterfinals. She has been joined in the round of the last eight by the Estonian Anett Kontaveit after her surprising 7-5, 6-4 triumph against the American Sofia Kenin and the title holder Petra Kvitova from the Czech Republic who edged past the Greek Maria Sakkari in a tight three-setter, 6-3, 3-6, 6-3.

Angelique Kerber is not quite so far down the road yet, but the Porsche Brand Ambassador is on the right track. In cruising to a 6-2, 6-2 success against the lucky loser Ekaterine Gorgodze from Georgia, she has got off to a good start at the tournament she won in 2015 and 2016. “It’s great being back here,” she said after her opening victory. “The Porsche Tennis Grand Prix is my home tournament. Even when one is rather alone out there in the arena without the fans, I feel very much at home here.” Her second-round match against the No. 4 seed Elina Svitolina (not before 6.30 pm CET) promises to be a far tougher affair. Six defeats in the last six encounters is the head-to-head record of the German and the Ukrainian. Angelique Kerber nevertheless has high hopes of progressing. “I’m not somebody that takes notice of such statistics,” she says. “I’ve got the advantage of having already played a match. I feel good and am looking forward to the game. I’ll be doing my very best to win it.”

Anett Kontaveit produced the first big surprise of the 44th edition of the time-honoured tournament. The Estonian, who is ranked No. 26 in the world, unexpectedly eased past the seeded American Sofia Kenin, who sits 22 places above her, 7-5, 6-4. It meant the 2020 Australian Open winner’s debut match at the Porsche Tennis Grand Prix was also her last for the time being. Anett Kontaveit, who stood in the 2019 final in the Porsche Arena against Petra Kvitova, dominated the game right from the first rally and prevented her opponent from getting into any real rhythm, mainly due to her powerful serves. The statistics recorded a total of 12 aces – a welcome donation for the “Aces for Charity” campaign whereby Porsche gives 200 euros to charities for every ace struck at the tournament. “I’m so happy,” said the overjoyed winner after clinching a quarterfinal berth. “At the start, I wasted too many break points. But then in the second set, I started taking my chances.”

Tamara Korpatsch close to a major upset
In the first match of the day, Germany’s Tamara Korpatsch was not far off from causing a major upset against Karolina Pliskova. In her very first encounter against a Top 10 player, she posed the 2018 Stuttgart winner massive problems before eventually only succumbing 7-5, 3-6, 6-3. She definitely had her chances as she led 5-2 in the first set and there was little to choose between the two until 3-all in the final set – but in the end the current world No. 9 was simply too strong for the German. Karolina Pliskova was glad to have taken the first hurdle but stressed: “I have to improve and find my rhythm.” She has the opportunity to do so on Thursday when she faces Latvia’s Jelena Ostapenko at 11.30 am CET. The 2017 French Open winner defeated the Swiss qualifier Stefanie Vögele 7-5, 6-4 in her first-round match.

The No. 2 seed in Stuttgart Simona Halep (Romania) will take to court for the first time on Thursday when she will play (not before 5.00 pm CET) against Marketa Vondrousova from the Czech Republic. Anna-Lena Friedsam, the only German alongside Angelique Kerber still left in the tournament, will also be looking to progress to the quarterfinals. The Porsche Team Germany player (not before 1.30 pm CET) is up against Aryna Sabalenka – a difficult task as the Belarusian is currently the world No. 7. The working day will not end there however for Anna-Lena Friedsam as, together with Mona Barthel, she is due back on court in the afternoon after the permitted break for a doubles – as the title holders. 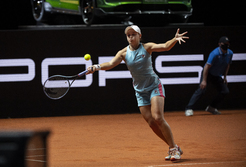 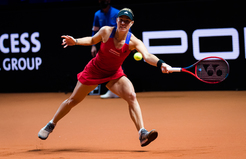 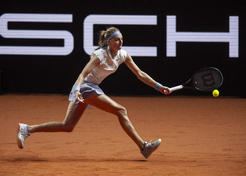 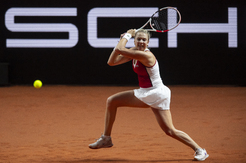 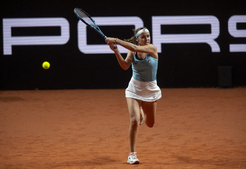 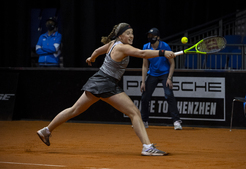 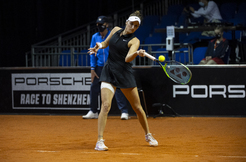 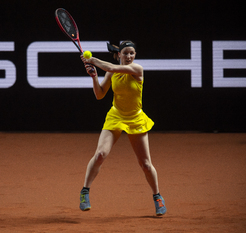 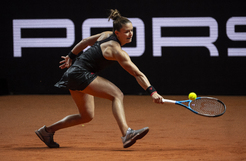