Nastasja Schunk treats herself to some chocolate after her impressive display

Stuttgart. The favourites have progressed on the first day of main draw matches at the Porsche Tennis Grand Prix – and a junior from the Porsche Talent Team has bowed out of the first WTA tournament of her fledgling career after putting on an impressive display in the Porsche Arena.

If the first singles of the day had been played in front of spectators, then Nastasja Schunk would have won over all their hearts. The 17-year old youngster, who had previously left an excellent impression when winning her two qualifying matches, battled bravely right up until the very end against Belinda Bencic. There was little to choose between the players in the first set which the German eventually lost 6-4 after having chances against the world No. 12. But the Swiss then upped a gear and won the second comfortably 6-2 even though her young opponent never gave up staving off a total of five match points in the process.

Asked after the match whether she was surprised by the dogged resistance put up by Nastasja Schunk, Belinda Bencic duly paid her opponent the nicest compliment going when answering.” No, I’m not surprised that it was such a difficult match. Nastasja is very talented, she played well and caused me a few problems. There’s a long road ahead of her and if she carries on the way she’s doing then she can go far.” Nastasja Schunk was also pleased with her performance: “It was another step in the right direction. I could have perhaps put Belinda under a little more pressure but I’m generally so happy after being given the quali wild card and therefore the great opportunity to show what I am capable of.” Smiling wryly, she let on what she will be rewarding her impressive display with in the evening: “I’m going to treat myself to some chocolate.”

The Porsche Tennis Grand Prix also came to an early end for Andrea Petkovic on Monday. Playing Maria Sakkari, the German, who was given a main draw wild card for the long-standing Stuttgart tournament, had no real chance and was beaten in two straight sets 6-2, 6-2. The Greek world No. 19, who has already beaten numerous top players this season and who recently fought her way to the Miami semi-finals, is appearing in Stuttgart for the first time and praised the Porsche Tennis Grand Prix in the highest tones in the post-match interview. Why hadn’t she come along to the Porsche Arena earlier? “It unfortunately wasn’t possible as I wasn’t good enough for this fantastic tournament.”

The world No. 1 also made her debut in the Porsche Arena. Partnered by Jennifer Brady (USA), the Australian Ashleigh Barty, the winner of the 2019 Porsche Race to Shenzhen and the WTA Finals, comfortably advanced to the next round of the doubles.

Numerous highlights on Tuesday
In the top first round encounter, the title holder will grace the court on Tuesday as Petra Kvitova will face the Australian Open runner-up Jennifer Brady from USA. Two Porsche Team Germany players will also meet when Laura Siegemund and Mona Barthel go head-to-head – the 2017 singles winner against the 2019 doubles winner. “I’m looking forward to my first match,” said Laura Siegemund. “It would be ten times better with a crowd. But it’s still Stuttgart and it’s still fantastic.” Her teammate Anna-Lena Friedsam has a good chance of progressing against the Norwegian Ulrikke Eikeri. Julia Middendorf’s dream is also still alive: The Porsche Junior Team player however has a tough job on her hands as she is up against the 2019 runner-up, Anett Kontaveit from Estonia. 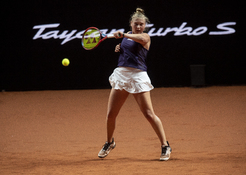 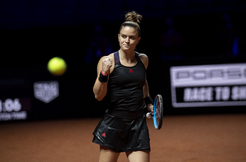 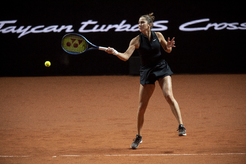 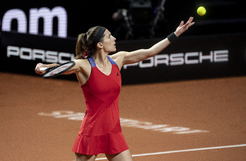 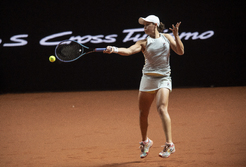